How much can a translator make?

The quality of translation can either make or break businesses.

The importance of good translation cannot be emphasized enough!

In this particular case, it made this K-drama, My Love From A Star, tremendously popular in China.

What is disturbing is that although translators were instrumental in the success of the K-drama in China, they were paid peanuts! Just USD2.60 for the translation of an entire episode!!

Can translators be fuelled by passion alone?

This is a very interesting topic, often very much debated amongst translators, new and seasoned ones.

Depending on who you are speaking to, many will stand their ground and demand to be paid a decent amount that justifies their professionalism and experience. There are also many “working” translators, who would take on jobs even at very low rates, just to keep themselves occupied and to pay bills.

How much do research companies think translators should be paid in Singapore?

Most of the time, businesses will look at reports from research/recruitment companies for salary recommendations when hiring.

To get a feel of what these companies think translators should be paid, we did a little research on the internet and found the result to be non-conclusive.

For example, based on figures updated on the 19th of January 2021, Glassdoor, a worldwide leader on insights about jobs and companies reported that the salary an in-house translator can make in Singapore range from a low of SGD600 to a high of SGD4000 per month. The average salary is approximately SGD3200 per month or SGD38,400 per annum.

Indeed, a global job site with over 250 million unique visitors every month, is more optimistic. Based on the 88 salaries report, as of 20th January 2021, Indeed reported an average annual salary of SGD52977 or around SGD4400 per month for translators in Singapore.

Salary Explorer, a salary comparison and career resources website for both employees and employers where you can find out the average and median salary for jobs in your location is by far the most optimistic. It reported that a Translator in Singapore typically earns around SGD6,880 per month or SGD82,600 per annum with salaries ranging from SGD3,510 (lowest) to SGD10,600 (highest) per month. 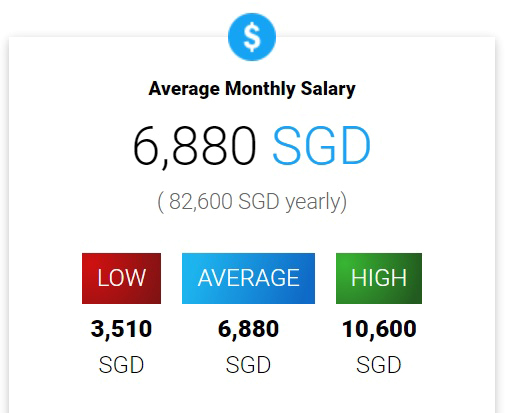 Are the suggested salaries for translators an accurate reflection of the actual situation?

From the researched figures, it is all rosy and well for translators. Given the current economic and covid-19 situation, the relatively flexible working hour, and the ability to work from anywhere, being a translator has just become even more attractive to many.

But are the figures accurate?

How much are translators actually paid?

We did a calculation based on the number of jobs listed for translators on the various sites and the salary offered and found out that in reality, the average salary for an in-house translator is around SGD2400 per month or SGD28,800 per year.

What is the per word rate and per hour rate like for a translator?

From the perspective of a translation and localization company with more than 20 years of experience in the market, we beg to differ. Hiring in-house and freelance linguists, these linguists include translators and editors. They can be located in Singapore or they can be working with us from any parts of the world.

A translator can also be paid by the hour when engaged to review or proofread translation work and their hourly rate can from as low as SGD10 per hour.

Of course, the rates stated above are general rates observed. There is no hard and fast rule.

Different companies do pay differently depending on their requirements, urgency of the project, its specialization, the rarity of the language pairs, etc.

Factors determining the rates of a translator:

Just like all goods and services, the amount a translator is paid is dependent on several factors:

Moral of the Story: Pay fairly

If you pay peanuts, you get monkeys.

Usually, a good translator or at least one that is in demand would expect to be paid higher or at least a fair amount. A translator with pride in their work will also likely not be accepting translation jobs at very low rates.

Like doctors and lawyers, a good & professional translator is the result of many years of formal education and more years of on-the-job training. The love for languages and passion for translation, is mostly what motivates one to be a translator.

However, translators need to live, eat, play, pay bills, and more. When not sustainably remunerated, this passion will die out sooner than later.

Guide: How to choose the right graphic design company

English & Chinese: What Sets Them Apart? PART 4 – Back to Basics: Words

There is such thing as a GOOD CLIENT!